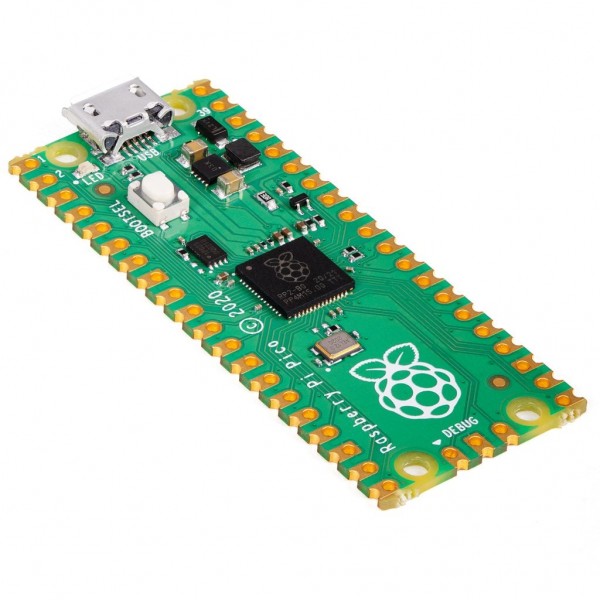 A low cost, high-performance microcontroller board built around Raspberry Pi's very own chip - the RP2040.

Raspberry Pi Pico is Raspberry Pi's first microcontroller board, designed especially for physical computing. Microcontrollers are a different type of device than Single Board Computers (like the Raspberry Pi Zero and previous generations of Pi), they don't run an operating system and they are typically programmed to do just one task - though that task can be pretty intricate and exciting! They're perfect for experimenting with hardware and using as the brains of custom devices, machines and inventions.

It can be easily reprogrammed over USB from a Raspberry Pi or other computer using the C/C++ SDK or the official MicroPython port. The landing page is the best place to get started, or scroll down for links to the technical documentation for both the Raspberry Pi Pico microcontroller board and the RP2040 microcontroller chip.

This is the unsoldered version. It comes without header pins so you'll need to pick some up separately if you're planning on plugging your Pico into into a breadboard or one of our Raspberry Pi Pico add-ons.

Raspberry Pi Pico is a low-cost, high-performance microcontroller board with flexible digital interfaces, built on silicon designed at Raspberry Pi. Key features include:

Documentation for the Raspberry Pi Pico board and the RP2040 microcontroller:

The API level Doxygen documentation for the Raspberry Pi Pico C/C++ SDK is available as a micro-site.